Challenging new projects. Creative yet practical solutions. Innovative ways to protect the planet – one property at a time. Catch up on the latest news from Cooperstown Environmental here.

Dust inhalation as a health issue has received increasing scrutiny at construction and remediation sites nationwide and in Massachusetts. Historically, the focus has been on the inhalation of respirable particulates by workers; fortunately, instrumentation is readily available that provides real-time worksite data for particulate concentrations in air. However, the focus is now broadening to include health risks associated with contaminants contained in the airborne dust on more sensitive nearby receptors who may also be exposed.  This is an issue that frequently must be anticipated for Release Abatement Measures, Immediate Response Actions, and comprehensive remedial actions at Massachusetts Contingency Plan (MCP) sites where significant earthwork is proposed.  Unfortunately, instrumentation is not generally available that provides real-time data for the chemical component of dust risks.

Traditionally, dust monitoring at a construction or remediation site has focused on dust as a particulate, especially the finer fractions that are most likely to enter and remain in the lungs.  Often, for lack of a better standard, site managers have used the threshold of 150 µg/m3 established for particulate matter finer than 10 microns (“PM-10”) developed by the United States Environmental Protection Agency as part of the National Ambient Air Quality Standards (NAAQS). This PM-10 standard is based on risk from particulates, independent of chemical contamination.

Many environmental-equipment rental firms can provide monitoring instruments that measure concentrations of PM-10 (or other size) particulates in real time. These instruments typically contain an alarm that can be set to activate when a pre-determined dust concentration is exceeded, and attachments can be added that will notify the user by phone or email if a level of dust is being generated that exceeds the alarm threshold.

Soil at many MCP sites contains heavy metals (notably lead) and organic compounds such as polycyclic aromatic hydrocarbons (PAHs) and non-volatile petroleum hydrocarbons.  These chemical components may also be present in airborne site dust and may represent a greater health risk than the risk resulting from the particulate component. Since there are no direct-reading monitors for dust-borne chemical contamination, it can be convenient to use dust monitors as a surrogate, but this requires equating a particulate concentration with a chemical risk, for which there has been little guidance in Massachusetts.

A first step in evaluating dust risks may be to use site soil contamination concentrations to run the Massachusetts Department of Environmental Protection (MassDEP) shortform for construction worker exposure to soil.  According to MassDEP, the soil shortform for the construction worker already takes into account inhalation of dust and ingestion of soil, based on conservative exposure assumptions.  Thus, if the site soil concentrations do not ‘fail’ the construction worker shortform, then dust derived from those soils will not likely represent an unacceptable risk for construction workers.  However, the residential shortforms for soil (for both imminent hazard and long-term risk evaluations) do not include evaluation of the dust inhalation pathway, and therefore do not lend themselves to evaluating dust impacts for residents in the vicinity of a construction or remediation site.

In the event that site soil concentrations fail the construction worker shortform or that residential exposure is an additional concern, another, relatively simple alternative is available.  A paper prepared by MassDEP staff Cynthia Weidner, John Fitzgerald, and Maureen Vallatini and presented at the 12th Annual International Conference on Contaminated Soils, Sediments and Water (Soils Conference) at the University of Massachusetts at Amherst in 1997 is currently available on the MassDEP website.

This paper provides a bridge between the chemical risks and particulate risks of dust by providing risk-based soil concentrations to meet MCP risk limits associated with the dust inhalation pathway. This newsletter article attempts to summarize the useful contents of the 1997 paper and to make the paper more generally known. Although the 1997 Soils Conference paper was not prepared under the authority of MassDEP and is not official MassDEP policy or guidance, it provides a reasonable approach to the issue in the absence of more specific guidance, and was used as a reference in MassDEP’s 2008 Technical Update titled “Characterization of Risks Due to Inhalation of Particulates by Construction Workers.”

The 1997 Soils Conference paper contains graphs of concentrations that represent a chemical risk of the eight Resource Conservation and Recovery Act metals, of benzo(a)pyrene as a conservative surrogate for PAHs, and of naphthalene as a conservative surrogate for non-volatile petroleum hydrocarbons, plotted as a function of the particulate concentration. If representative data are available for contaminant concentrations in site soil, the construction/remediation site manager can assume the same concentrations to be present in site dust for the purposes of assessing risks due to exposure to the dust. In its review of a draft of this article, MassDEP noted that empirical data suggest that the PM-10 fraction of soil may represent a higher percentage of metals impacts than coarser fractions.  This is probably a function of the greater adsorptive capacity of fine soil fractions, particularly clays.  To be conservative, an LSP may wish to take this factor into account in performing related risk calculations.

Using this general approach, a particulate concentration can be identified on the graphs in the 1997 Soils Conference paper that represents the risk threshold for the chemical contaminant of concern in dust. Thus, these graphs can be used to identify the particulate concentration at which a dust monitor alarm should be set to notify the site manager of a potential chemical health risk (based on the defined exposure assumptions).  Based on the frequency and duration of the alarm events, the site manager can then make decisions about when it may be appropriate to implement dust-control measures or, conversely, to conclude that routine site operations are not generating concentrations of dust that represent an MCP risk.

The equations and assumptions used to derive the graphs are appended to the 1997 paper. The exposure assumptions on which these graphs are based are particularly conservative in some ways (they assume a 1- to 2-year-old child continuously exposed to site dust 24 hours/day, 7 days/week for one year), and the underlying toxicity and risk factors are those accepted for use in Massachusetts in 1997.   Again, these are very conservative assumptions.  The 1997 Soils Conference paper even noted that a scenario of 8 hours/day would be reasonable if contaminated soil is covered during off-hours. Additionally, in its 2008 Technical Update Characterization of Risks Due to Inhalation of Particulates by Construction Workers, MassDEP advised using a gastrointestinal (GI) multiplier of 2 for the amount of PM-10 particulates ingested by nearby residents (i.e., the effective exposure concentration of respirable particulates for the GI system is 2 times the concentration of PM-10), rather than a multiplier of 1.5 for construction workers.

With these caveats, a site manager can compare the assumptions used in the paper with his or her own assumptions, and can incorporate appropriate assumptions in the equations used to derive monitoring thresholds specific to the parameters of concern and to the site. In this manner, we have reviewed the calculations used to derive the risk thresholds in the 1997 Soils Conference paper, and offer an update based on current risk-based values, the updated recommended GI multiplier, and current recommended relative absorption factors (RAFs), as described below. 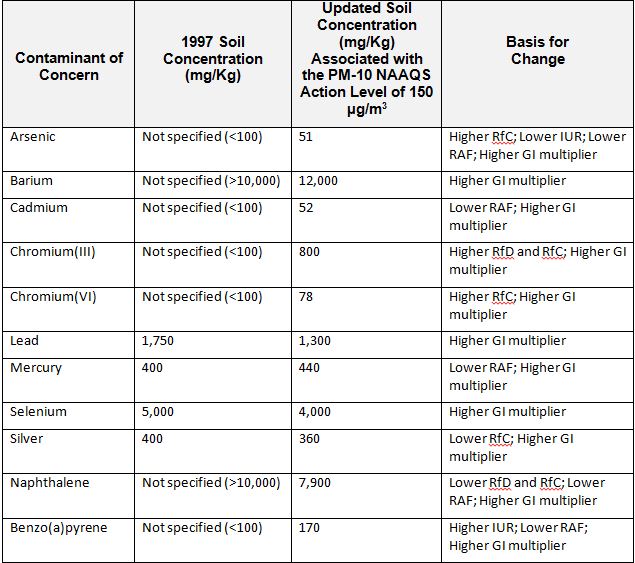 It is important to note that the updated soil concentrations above are based on conservative and general assumptions about a construction site. For example, the 1997 Soils Conference paper assumes a construction period of one year; however, the MCP default assumption for construction projects is only six months, which is more realistic considering the New England climate and long winters where the ground is frozen for at least four to five months of the year, typically precluding dust generation. Additionally, if a site has soil concentrations close to the thresholds above, a site-specific Method 3 Risk Characterization could be used to yield more realistic numbers. For example, the noncancer-based thresholds (all the above except chromium(VI) and benzo(a)pyrene) are based on a target HI of 0.2, which assumes there are at least five of these contaminants present at a site at levels that would drive an exceedance of the MCP HI risk limit of 1. If fewer contaminants are present at a site, then a higher target HI would be appropriate for use in the site-specific Method 3 Risk Characterization. Similarly, the target Excess Lifetime Cancer Risk (ELCR) of 1 in a million (1 x 10-6) was used in the calculations for cancer risk, but only four of the eleven contaminants listed above have cancer toxicity values. Therefore, in order to not exceed the MCP cancer risk limit of 1 in ten thousand (1 x 10-5), a target ELCR of 2.5 x 10-6 could be used instead of 1 x 10-6. Furthermore, if the site has fewer than four contaminants with cancer toxicity, then the target ELCR of 2.5 x 10-6 could be adjusted even higher.

To summarize, if a site has soil concentrations for the listed individual contaminants near the PM-10 thresholds provided in the table above, and the site manager is considering using the PM-10 NAAQS as a criterion for dust control, then the site manager should consider using a site-specific Method 3 Risk Characterization approach.  Alternatively, the equations provided in the original paper can be used with the risk factors in use at the time of the project to calculate the dust concentration below which the concentration of the contaminant of concern in soil represents No Significant Risk.  Dust monitors can be set to this new dust threshold (independent of the PM-10 threshold) to monitor MCP risks related to contaminated dust.

In the field, much relies on monitoring methods, which can be labor intensive. Typically, conditions that trigger the monitoring instrument alarm last for less than a minute, then subside, and frequently are from sources unrelated to site-related dust.  Such unrelated soil-dust sources include a street-sweeper passing by, or diesel construction equipment passing close by the instrument or idling nearby.  Ideally, the site manager would identify the reason for the alarm so that unrelated sources can be discounted in tracking cumulative dust exposures.  Unfortunately, the delay in receiving a notice of alarm remotely (via phone or web) often means that the source has disappeared (e.g., the street-sweeper has gone around the corner) before anyone is aware of or can identify the problem.  The only alternative is to assign personnel on-site full time to constantly track dust issues.  This can represent a significant addition to the labor budget of a long-term project.

In addition, reliable data collection requires proper maintenance and calibration of the instrument, and monitoring at an upwind location is recommended to establish background dust levels. Because wind direction will vary with weather, the upwind and downwind directions should be identified (at a minimum) at the beginning of each day and the monitors positioned accordingly.  For these types of activities, the LSP or other environmental professional will need to be on site at least each morning to service and set up the equipment.  Even these reduced labor costs can represent a significant portion of the field budget for a long construction project, even before instrument rental costs are added.

Ambient air will always have some concentration of background dust, so collecting background data before a project starts may also be valuable as these levels can be subtracted from site concentrations before risk is calculated.  For long-term projects, actual analytical testing of dust may also be appropriate to demonstrate that the assumed contaminant concentrations were representative.

**The LSPA’s Loss Prevention Committee appreciates MassDEP’s willingness to review this article and provide comments, which are incorporated as noted.**

This article was first published in the June 2016 LSPA Membership Newsletter and was written by James S. Young, LSP, Cooperstown Environmental along with Crista J. Trapp, Senior Scientist, The Vertex Companies, and the LSPA’s Loss Prevention Committee.

Massachusetts Department of Environmental Protection, July 2008, Technical Update – Characterization of Risks Due to Inhalation of Particulates by Construction Workers, available at http://www.mass.gov/eea/docs/dep/cleanup/laws/inh0708.pdf.